Posted by indiansinpak at 5:54 PM 6 comments:

A marriage (not) made in heaven...

We've been back for over six months, and even now our most read post is Crossing the Indo-Pak Border -- written in two parts. We get over a hundred hits each day, if not more, from both Indians and Pakistanis obviously wanting to know how to cross the border.

Unfortunately for them, the post was written in a different context, and does not list "10 hot ways of sneaking into the Indian or Pakistani territory". I can almost imagine their crestfallen faces when they land at our blog with a lot of hope and stomp out in disgust.

That brings me to the main issue, are there really as many people, in India or Pakistan, who really want to take a peek into the other country. I can't imagine non-state actors googling ways and means of crossing the border.

That leaves me with the only other suspects: Lovers. Who else would want to read a blog and decipher how to cross over. My belief is strengthened by the occasional emails we receive asking us for advice: Should my khala ki beti marry an Indian? Or my friend is marrying this girl from Karachi, whom he had met in London, will he be allowed to visit her family in Pakistan?

Being a die hard romantic I would want to give wing to such relationships -- you know Milne Do and all that -- but then my head rules over my heart.

The romantic in me died when I blogged about an Indian lady who had met and married a Pakistani in the UK in the 1950s or so. The marriage lasted only a few years and by then she was a green passport holder. Her return to India was ruled out. Her stay in Pakistan was imminent. A Pakistan which was no longer home.

My mind raced back to the issue of Indo-Pak marriages yet again when I got an email from an independent Pakistani filmmaker on a related issue. I started thinking if it was really worthwhile to go ahead with such marriages.

It's fine that you do not carry the baggage of Partition, meet in a third country, decide to marry and stay put in that third country.

However, trading passports for a marriage, is not recommendable. I think marriages in itself are tricky and it takes a lot of effort to keep the boats from sinking. Imagine the plight of a wife, it is mostly she who has to relocate, who gets stuck in India or Pakistan after adopting her husband's nationality. I shudder at that thought.

I know its about pyaar vyaar. But is it really worth crossing the border for?

Take the plunge only if you are a braveheart and are prepared to face the consequences if, God forbid, love flies out of your marriage.
Posted by indiansinpak at 10:54 PM 7 comments:


As I walked to Attari, the Indian side of the border, after a rather extended stay of about six years in Islamabad, the solitary thought that plagued my mind was: will I ever go back?

Following our sudden exit from Pakistan, it seems like an impossible task - almost as impossible as finding forever homes for our many rescued street cats, some of whom we were forced to leave behind.

I have always been fascinated with cat and dog stories, especially the ones caught between two unfriendly security posts: Saadat Hasan Manto's "The Dog of Tetwal" who wagged his tail happily at both Indian and Pakistani soldiers but sadly "died a dog's death"; I am intrigued by the female dog that Sarah Singh captured in her award-winning film "The Sky Below", the one who criss-crosses the India-Pakistan border near Pul Kanjri, a small village near Amritsar, for her lunches and dinners.

When I heard about this dog, I wrote to Singh requesting her to send the clip of the film where the dog appears. "I was there during the mid-day sun, and against this metallic web of lines, a black female dog edged her way through from one side to the other, negotiating the twists and turns of the barbed wire in a manner which suggested her familiarity with the routine. A deft approach by hungry dog in the rising heat," she wrote.

"...got to the fencing that denotes the border area of the two Punjabs near Pul Kanjri, a small village about 20 km from Amritsar - quite a lot of barbed wire that weaves in and out and circles around itself as it creates a barrier about 10 ft high and 5 ft thick - with an electric current running through to fry those who test the division at night..."

Just as I was stepping out of Pakistan, I, too, noticed a little black dog wagging her little tail at the Zero Line. She let me touch her and also shyly posed for a picture before disappearing into the greens of Pakistan. She breezed in and out of "the enemy country" making me so envious of her freedom. No wonder they call her Lucky!

Lucky made me think of a late friend's suggestion, who always dismissed my worries of crossing over with our pets with his seemingly funny, "You cross first and ask them to follow". Unfortunately, my pets were not so Lucky!

We rescued over 20 cats (and fed many more) and three dogs in our stay in Islamabad. The first set of cats, who turn six on September 20, came to us when they were three weeks old. Our fourth rescue is from near Lal Masjid and we lovingly call him General!

Often we would get asked why we kept so many cats and that too jungle ones. Once a security officer came to our place while my husband was away. He sat me down and after a lot of dilly-dallying got to the point. "So what is the R-E-A-L reason for keeping so many cats?"

Security officers meant to tail us, whom we fondly referred to as Bhais, followed me around in the neighbourhood when I went barging into houses to rescue kittens who were too small to scale walls, or when our outdoor cats went missing; or as on one occasion, a kitten stuck its head into a washing machine tube and we were called to pull her out.

After the first few months of following me around on the kitty-spotting and kitty-rescuing mission, the Bhais, I think, finally realized there was no hidden agenda in my expedition to the neighbours.

Once we had a dog trainer over for Rocco. The Bhai stopped the trainer after his session with Rocco, and asked, "Are you training the dog to attack us?" The trainer, who was pushing to extend his session from a month to three months decided against it.

We were also not so lucky vis-a-vis the Bhai brigade when a Pakistani lady offered to adopt Itty. She came home to see Itty, liked her and was taking her home in her car when she got chased and stopped by the Bhai at the end of our street. The lady was bombarded with questions on her association with us. She drove back, dumped Itty back into our house, and left with a resounding, "I don't want so much trouble for a cat!"

Getting a home for street cats, who are of mixed breed, is not easy on either side of the border. Itty never found a home again. This prettiest cat in town is the one I would go want to go back to Pakistan for. Also, Chiclet, the little kitten we rescued from the neighbour's washing machine; Chocolate, her son, whose only interest in life is food; and Chammak Challo, a semi-Persian cat, who sashays down the street with the toms fighting to get her attention.

(The post was first published here:
http://www.thefridaytimes.com/beta3/tft/article.php?issue=20130913&page=21#sthash.0P0MHMkx.dpuf)
Posted by indiansinpak at 3:03 PM 6 comments:

After spending 5 years and 10 months in Pakistan we are back in India. We hope to start blogging about our life and times in Pakistan soon. Stay tuned.

I can haz another kitteh...

My husband and I love cats. I have no memory of a white cat I had when I was about 4-5 years old or that I had decided to leave home with her in protest when my little sister was born; but my husband's family has always had cats and my mother-in-law almost missed our wedding because her 13-year-old cat was sick.

It was our first day in Islamabad and someone mentioned that three kittens needed a home. The kittens were about three weeks old and we agreed to take them in. Seeing our enthusiasm that someone then gently told us that the kittens were not Persian, Siamese or Burmese. For us, the sound of kittens was enough! 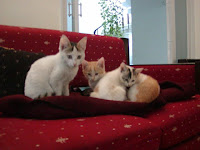 The story of our lives did not end with three kittens. On an evening out, my husband and I saw a kitten being kicked by a young couple and we decided to bring him home too.

General, Mohtarma, Motu and Chutku were perfect stress busters at a time when things were hot politically (BB's assassination, emergency, elections) and we were also trying to cope with a personal tragedy.

Happiness, for us, was in the cats and we fretted if they were not eating right or had been in a fight. Some times we even overdid it. Like the time Mohtarma had a C-section and was returned to us in a semi-conscious state. We thought she was dying. While I cried in private, my husband sat near her box and sobbed, "Mohtarma, please don't die!"

Four years on, we have about 20 cats and counting -- all rescues off-the-street.

That also puts us high on our neighbours' hate list. We've had to barge into homes (with Bhais in tow) to look for missing cats; or fight with people who treat their backyards, where our cats may or may not have sprayed, like a jannat ka tukda; smile at unkind comments such as yeh toh aapne ghar ko zoo bana liya from landlord; or quench people's curiosity over the real reason why we keep so many cats -- woh bhi jungli; friends asking sarcastically: so whats the count?; and guards having a good laugh when we call out for Chammak Challo or Chocolate.

Taking care of scores of cats is surely not easy. We regularly chase Toms in the middle of the night and keep moving furniture to the garage to make room for more and more....We also leave our bedroom window open (in peak winter/summer too) to let in Itty, our outdoor cat, when she thinks she has had enough of the outdoors.

This September we celebrate the fifth birthday of our first set of four cats and, so far, we've loved every moment with them. In that sense our Pakistan posting has helped us rediscover ourselves -- and I, for one, would love to chuck my current profession to become a full-time cat-keeper.

Unfortunately, we've also seen a lot of cats die -- and one being maimed for life. Time has helped us cope with these tragedies, but what do worry about now is our cats' future upon our return to India. We do not know if these cats are Pakistani or Indian - something we love checking with them all the time -- or if we would be allowed to cross over with them but the thought of leaving behind even one kills us.

That doesn't mean we are shutting the door on our feline friends yet. Meet Tiger and Hero the newest additions to our cat family.


And do remember to join in for General-Motu-Chutku-Mohtarma's fifth!
Posted by indiansinpak at 9:11 PM 41 comments: