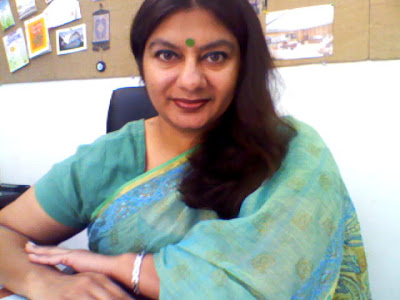 I first met Marvi Sirmed -- a "Bindi wali Hindu" -- at a dinner in Islamabad three years ago. Apart from the fact that I loved her crisp cotton sari, her large round bindi and her shudh Hindi -- I also loved what she stood for -- PEACE. She wished for a truly secular Pakistan and debunked the two-nation theory.

I have spotted Marvi, a Muslim by birth, several times since. Always in her trademark sari and bindi. I am sure many mistake her to be Indian (read Hindu), even though Indians never step out in a sari in Pakistan (at least not in public spaces), let alone sport a bindi!

A few months ago, I saw Marvi being promoted from being "Indian" to "Indian agent" in a television show. I wasn't surprised at all. After all, my little-known and low-profile Pakistani Hindu neighbours are "Indians" too. I once raised the issue with one of the younger members of the family. "We've been living here for decades and everyone knows we are Pakistanis. Still they call us Indians, because we are Hindus!" he said. I felt sad for the boy.

I asked him if he would like to visit India. "Never," was his answer. "If we go to India Pakistanis call us Indian spies, and Indians call us Pakistani spies," he added.

Marvi, of course, is a bigger sinner. She has taken on the high and mighty because she believes in a Pakistan where Hindus and Christians enjoy the same rights as Muslims. For those of you who still haven't seen Pakistan's Jhansi ki Rani take on Zaid Hamid, famously famous for hating all things Indian and, more recently, for calling Marvi a bindi wali Hindu -- please do see this. Bindiya chamkegi!
Posted by indiansinpak at 9:22 PM